Victoria Britton to speak in live broadcast on the Scientology death of her son Kyle Brennan, Friday, February 15

The God Discussion Show has announced that Victoria Britton – whose son Kyle Brennan died in Clearwater, Florida, the Scientology  Mecca, under very suspicious circumstances while visiting his Scientologist father -- will be the featured guest for the program’s two-hour Friday, February 15, live podcast.

Speaking publicly for the first time, Victoria will share with radio host Deborah Beeksma her 20-year-old son's story: what he was like growing up; how Kyle, a non-Scientologist, felt about the Church of Scientology; and how he became a victim of the church's dictatorial "handling" mandate and its well-known war against psychiatry and psychotropic medications.

Victoria will also talk about Narconon, the Scientology-run facility that bills itself as a legitimate drug rehabilitation center. Victoria's segment will last one hour.

During the show's second hour, ex-Scientologist Lance Marcor will discuss "handling" and "disconnection", two of Scientology's most injurious policies; Dr. Stephen Wiseman will talk about the church from a psychiatrist's point of view; and David Love will talk about Narconon - how the facility treats illegal drugs and medically approved medications as being one and the same.

The Friday, February 15 show will air at 6pm Pacific/7pm Mountain/8pm Central/9 pm Eastern/times, and 3am GMT. The show can be accessed through the God Discussion Show page. A podcast will be posted at the site after the broadcast.

Dr. Stephen Wiseman is a psychiatrist and the medical director of the Complex Pain Centre at St. Paul's Hospital, Vancouver, Canada. He has researched and presented on Scientology's relationship with psychiatry for many years, conducting workshops at both the American and Canadian Psychiatric Association annual conferences.

Dr. Wiseman is a proponent of evidence-based medicine, and believes that the fear and mis-information presented by Scientology about psychiatry over the years has perpetuated the stigma against patients and their families and has been very destructive to the cause of rational mental health treatment for all who require it.

David Love, who was born on the West Coast of British Columbia, now resides in the Montreal area. David formed a charitable organization in 1990 and was the director of a rehabilitation center for substance abuse.

David was both a patient and a staffer at the Narconon facility in the province of Quebec and is completing a book on his experience there. He has appeared on several God Discussion shows.

Lance was fully trained in the church’s “ethics policy”, a bedrock principle of founder L. Ron Hubbard’s teachings, and put in charge of 300 staff members’ “ethics.” Lance left the church in 2007, and he is uniquely qualified as a former Scientology insider to speak about the organization’s inner workings and little-understood doctrine, policies, and procedures.

Kyle Brennan was born on April 2, 1986, and died on February 16, 2007. He was a talented artist and prolific writer of short stories. Though he was only twenty at the time of his death and a sophomore in college, he was a man of international connections.


Kyle's father's family were Irish-American Catholics. Kyle dreamed of visiting Ireland with his oldest brother Scott and then returning to open a restaurant in their home town.

Kyle spent a good deal of time visiting Berlin and other cities in Germany since his older brother Sean was stationed with the US military there. A visit Kyle made to the great church of St. Michael in Bamberg left a profound impression on him and strengthened his resolve to fight against evil.

Victoria Britton has been seeking the truth about Kyle’s death—and fighting for justice for her son, despite tremendous adversity—since his death in 2006. She believes that Kyle’s story is an important one that must be told. It can serve as a warning to others. It can save lives.

Deborah Beeksma is the host at GodDiscussion.com, a news and review service for the growing number of people not affiliated with an organized religion.

God Discussion is a site “for believers who don’t go to church.” The views expressed on the site are not expressly denominational. It honors points of view from many traditions in discussion about God and how beliefs impact families, government, and culture.

For background we refer readers to the article at Justice For Kyle Brennan - The death of 20-year-old Kyle Brennan as an Enemy of the Church of Scientology. 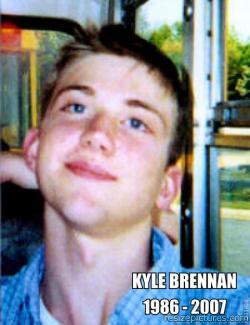 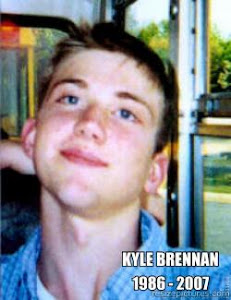 Links to Depositions and Documents